GMT/Python update and feedback from Scipy 2017

Last week I presented the first working prototype of GMT/Python at Scipy 2017, which is my favorite conference. I got a lot of excellent feedback about the project and will need to make some major changes as a result. Sadly, I wasn’t very good at managing my time during the talk and didn’t get to show the internals of the library. I’ll use this post to describe how things are currently implemented, what I learned from the feedback, and what changes I’m making to the code base.

Before we dive in, you can watch my talk on YouTube or just take a quick look at my slides.

You can try out the demo notebook from the talk if you’re on Linux or OSX (sorry Windows users, we’re working on it). First, you’ll need to install an alpha version of GMT 6.0.0 from conda-forge:

I should note that this only works because of the amazing help I got from Filipe Fernandes, Mike Hearne, and Ray Donnelly during the Scipy sprints.

Now you can install the GMT/Python version from the talk:

All our code is hosted on the GenericMappingTools/gmt-python repository on GitHub. The Python package itself is called gmt so that you can import gmt instead of import gmt-python (which looks a bit silly). The following example wasn’t on the video but it shows what is currently possible with the library: 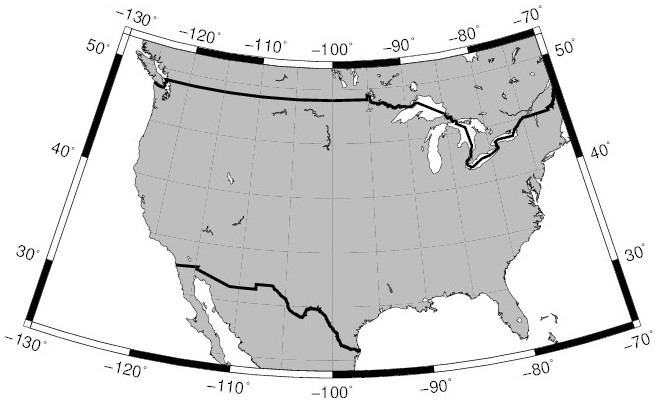 Here is what the file structure of the gmt package looks like:

The subpackage gmt.clib contains all of the low-level ctypes code that interfaces with libgmt. A user will not need see or use this package. The main function that we need from the C API is GMT_Call_Module, which is wrapped by gmt.clib.call_module. This is how we execute all of the GMT modules (pscoast, grdgradient, etc).

Each module is implemented as a function in one of the *.py files in the gmt package. For example, the Postscript generating modules live in gmt/ps_modules.py. These “module functions” are all accessible from the top-level package namespace. This means that you can access them as gmt.pscoast instead of gmt.ps_modules.pscoast.

All of the unit and integration tests live in gmt.tests and are shipped with the package. Also included is a gmt.test() function that runs all of our tests using pytest. I’ll go over how we run the tests below.

This is what a function that wraps a GMT module looks like:

The function takes keyword arguments (**kwargs) and must have the same name as the corresponding GMT module, in this case pscoast. In the Python wrapper, the ps prefix doesn’t really make much sense because we don’t need to care that this module writes Postscript. We’ll implement aliases for the function names later on to deal with this.

The body of the function is quite simple and is only two lines. First, we need to create a GMTAPI_CTRL C structure that is required by all GMT functions. The gmt.clib.APISession context manager takes care of creating the structure by calling GMT_Create_Session from the C API, handing us a pointer in the session variable, and destroying it on exit using GMT_Destroy_Session. Next, we use gmt.clib.call_module to execute the pscoast GMT module. This function wraps GMT_Call_Module from the C API and receives inputs as a string of command-line arguments, like '-R1/2/3/4 -JM4i ...'. Function build_arg_string from the gmt.utils module takes care of transforming the kwargs dictionary into that string.

Notice that this functions doesn’t pass in any data to the C API. We’re still working on that.

The majority of the parsing work is being done by the decorators (the things with @ symbols) that live in gmt.decorators. The first is kwargs_to_strings that takes care of converting some of the function arguments into string representations. By default, it will convert any boolean arguments (True or False) into the empty string (if True) or remove the argument from kwargs (if False). For example, P=True will be transformed into P='' so that the argument string made by build_arg_string will be -P. kwargs_to_strings also allows specifying special conversions. Here, we ask it to convert the R argument into a string if it’s a sequence (list, tuple, etc). So if given R=[1, 2, 3, 4] it will replace that with R='1/2/3/4'.

The argument aliases are handled by use_alias. The format is ARG='alias' and it will replace any instance of 'alias' in kwargs with 'ARG'. This allows all other functions to only deal with the GMT version of the arguments and not have to worry about the aliases.

Finally, fmt_docstring inserts stubs into the docstring, like a list of aliases (provided by use_alias), a link to the GMT module documentation, common arguments, etc. See the decorator docstring for a full list.

The testing code is packaged with the library in gmt.tests. We use pytest-mpl to test plot generating commands. I had to hack together a class that implements a savefig method to make pytest-mpl work. This is bundled in a decorator called figure_comparison_test. A typical test looks like this:

When you run the tests, pytest-mpl will generate the figure and compare it to a baseline that we have stored in gmt/tests/baseline.

Paul and I had the chance to talk about the project with a lot of smart and interesting people. Many thanks to Joe Kington, John Leeman, Ryan May, Filipe Fernandes, Mike Hearne, and Benjamin Root.

Since a few people seemed interested in contributing to the project, I decided to add a Code of Conduct to ensure that everyone who wants to get involved know the rules. I copied it from the Contributor Covenant template. It’s so easy that there’s no excuse for not having one anymore.

I also adapted the great “Impostor syndrome disclaimer” from the MetPy project. This was originally proposed by Adrienne Lowe during an awesome Pycon talk. I highly recommend that you take a few minutes to watch it.

By far the most requested feature was to have an object-oriented API, like that of matplotlib. I can see the appeal and usefulness of this and was convinced to make the change. It makes sense and we’re already doing something like it in an ugly way to be able to use pytest-mpl.

What I’m not willing to do is to support both the existing API with functions and one with classes at the same time. I don’t like that there are two ways of doing the same thing in matplotlib. It causes unnecessary confusion, particularly if you’re new to the library. And it goes against the Zen of Python:

There should be one-- and preferably only one --obvious way to do it.

So I’m going all in with the classes.

Note that this will only impact the figure generating functions. Other parts of GMT will still be wrapped by functions in the gmt package.

The Figure class can know how to plot and insert itself in the notebook using the rich display features in IPython. I can think of a few possibilities to view the figures in the Jupyter notebook:

I’ll probably implement some form of the show function to make it display a pop-up window in the terminal as well. This is a case where a user might want the gmt.show option to view more than one figure.

These options are not mutually exclusive. What I’m still pondering is whether or not to implement some of them (#1 will always be possible). Since I work mostly on the notebook, I don’t care too much about #4. But I’m sure a lot of you have different needs and preferences.

How would you prefer to display your images? What would you like to see in the API? Let me know in the comments or on GitHub.

Back to the blog Comments? Let me know on Twitter