Thoughts from the Introduction to Python Workshop at UH Manoa

Last week, I taught a 3-day Python workshop at the Department of Geology and Geophysics of the University of Hawaii at Manoa, where I'm currently doing a postdoc. It covered the basics of computer programming with Python, starting from the very beginning. Below are thoughts and information about the workshop, the demographics of people who signed up, and the feedback that I got from the participants.

See the workshop page and Github repository for more information and links to material used.

I wanted this to be a hands-on workshop of the basic concepts needed to use Python for research. Participants who complete the workshop should be able to use Python to gather data from one or more files, process the data, run an analysis, make publication quality figures, and save the output. Most importantly, I wanted participants to know what they should type into Google to learn more about Python.

The class is based on a mixture of the Software Carpentry lessons Plotting and Programming in Python (under development) and Programming with Python. However, I use temperature data from Berkeley Earth instead of the Gapminder and inflammation data used by Software Carpentry. For example, our goal for the second day of the workshop was to reproduce this figure for average temperature variation in Hawaii from the website: On the last day, we finished with some code that processed a list of country names to download the respective data file (using requests), load it into Python, make a figure, and save it to a different folder (see this Jupyter notebook for the code).

I also used a few techniques from the Software Carpentry Instructor Training, mainly the shared class notes (I used Google Docs instead of Etherpad) and colored sticky notes. The sticky notes were in two colors: pink and blue. Learners kept the blue sticky note on their laptop lid if everything was OK. They put up the pink one if they have a problem or need help. This way, myself and the teaching assistants can know at a glance who needs help. I had them write positive and negative feedback on the sticky notes at the end of the workshop.

The notebooks that I created during class and some notes for myself are in the Github repository (in the notebooks and notes folders, respectively).

I asked all participants to sign up through a Google Form that asked a few questions regarding their operating system, background in programming, and position at the university. The file demographics.csv in the Github repository has the anonymous information from this form. I wrote some code to analyze the data and generate the figures below using pandas and matplotlib. You can find in the demographics-analysis.ipynb Jupyter notebook (also in the Github repo).

First, lets look at how many people signed up and then actually attended each day. 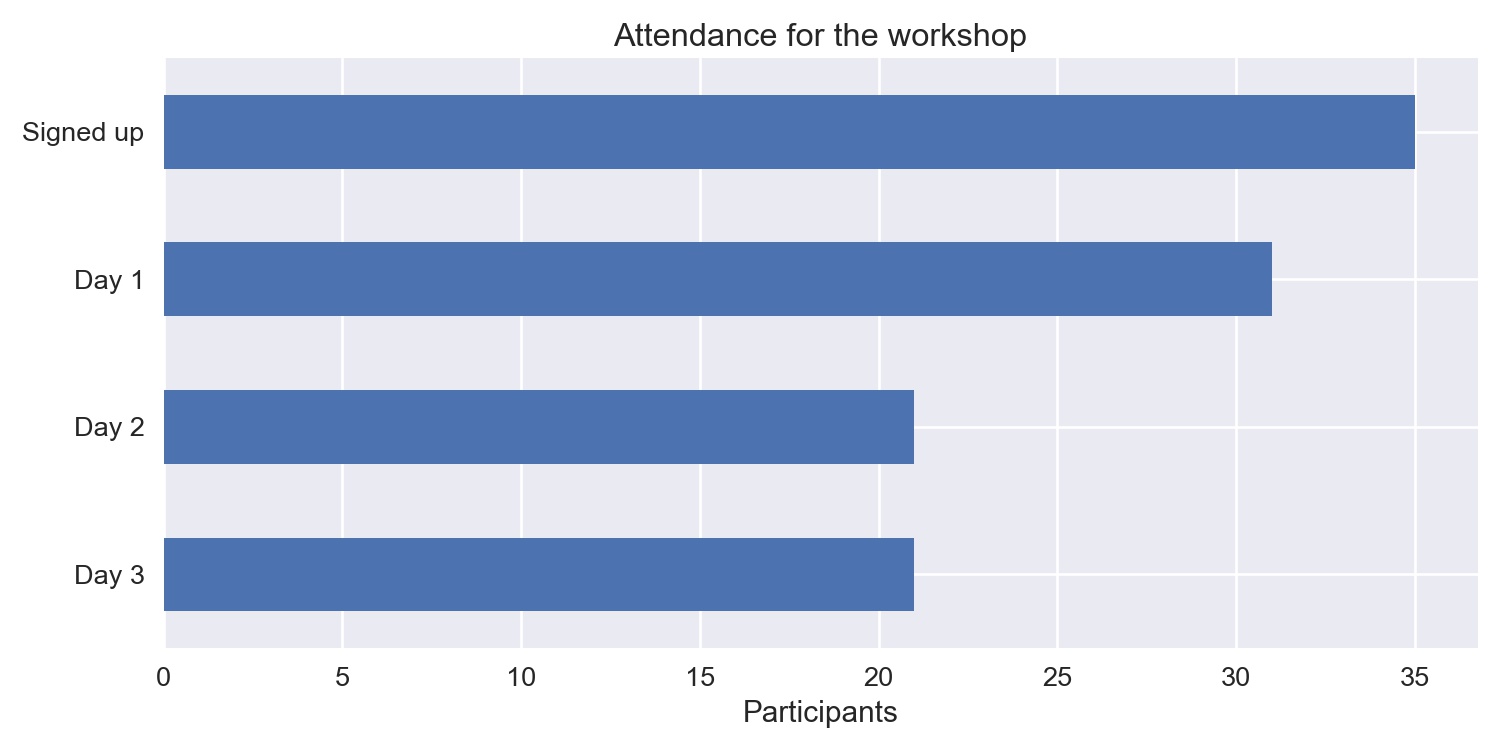 We were very lucky that most people who signed up also attended the workshop on the first day, even though there was no sign up fee. It seems that the workshop really fills a need in the community! Some people gave up after the first day. Maybe it was too fast, or too basic, or life just happened. I can't really tell because I failed to collect feedback at the end of each day. That is something to keep in mind for the next iteration: get feedback every day. 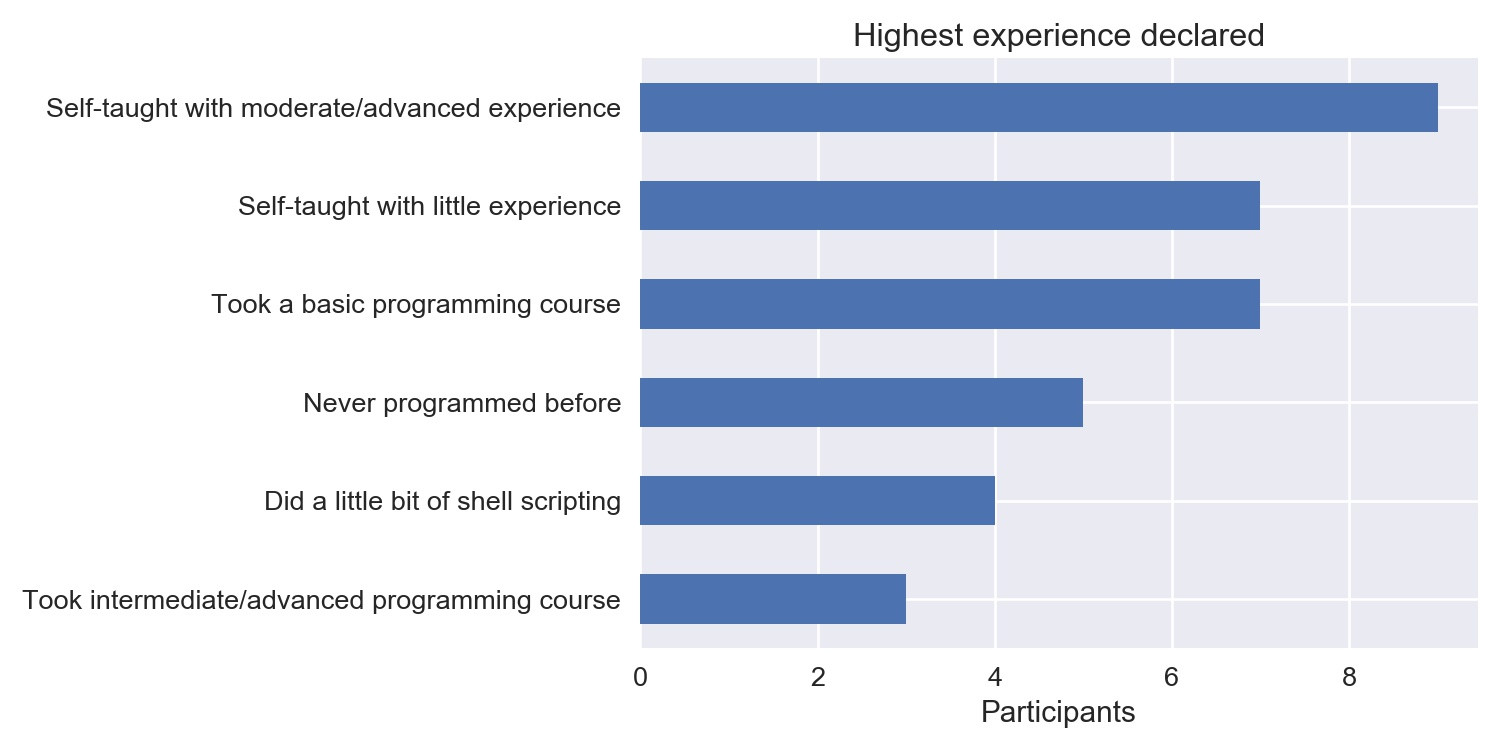 The experience level of participants was more evenly distributed than I expected. I was very pleased with the number of people who had never programmed before. But the distribution made it challenging to keep everyone motivated and following along. From the feedback (see below), it seems that I managed it well enough. 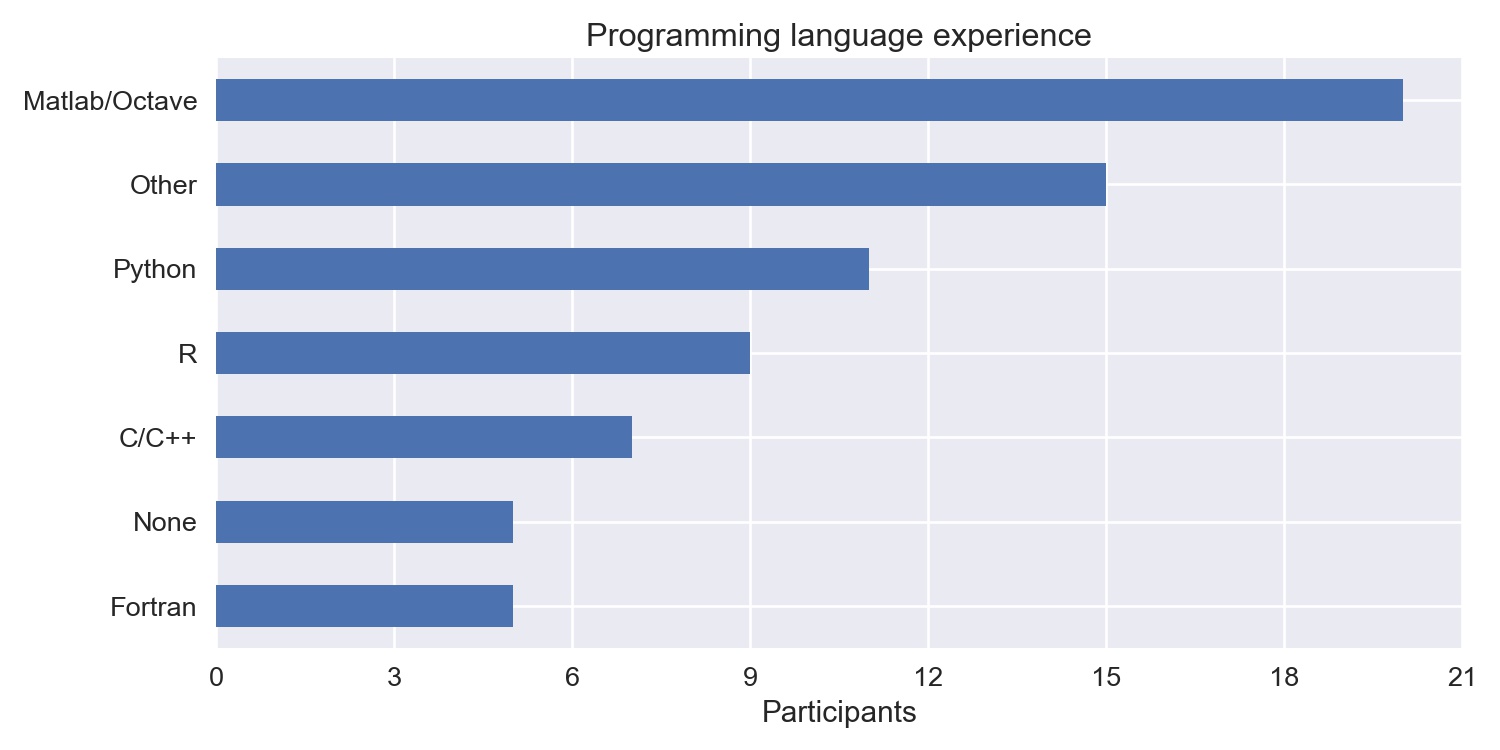 Not surprisingly, most participants who already programmed know Matlab. What was a bit surprising is how few people reported experience with Fortran. Is this a reflection of the age of participants (a lot of young grad students)? The number of Fortran users does correlate with the number of faculty who signed up, so maybe yes. 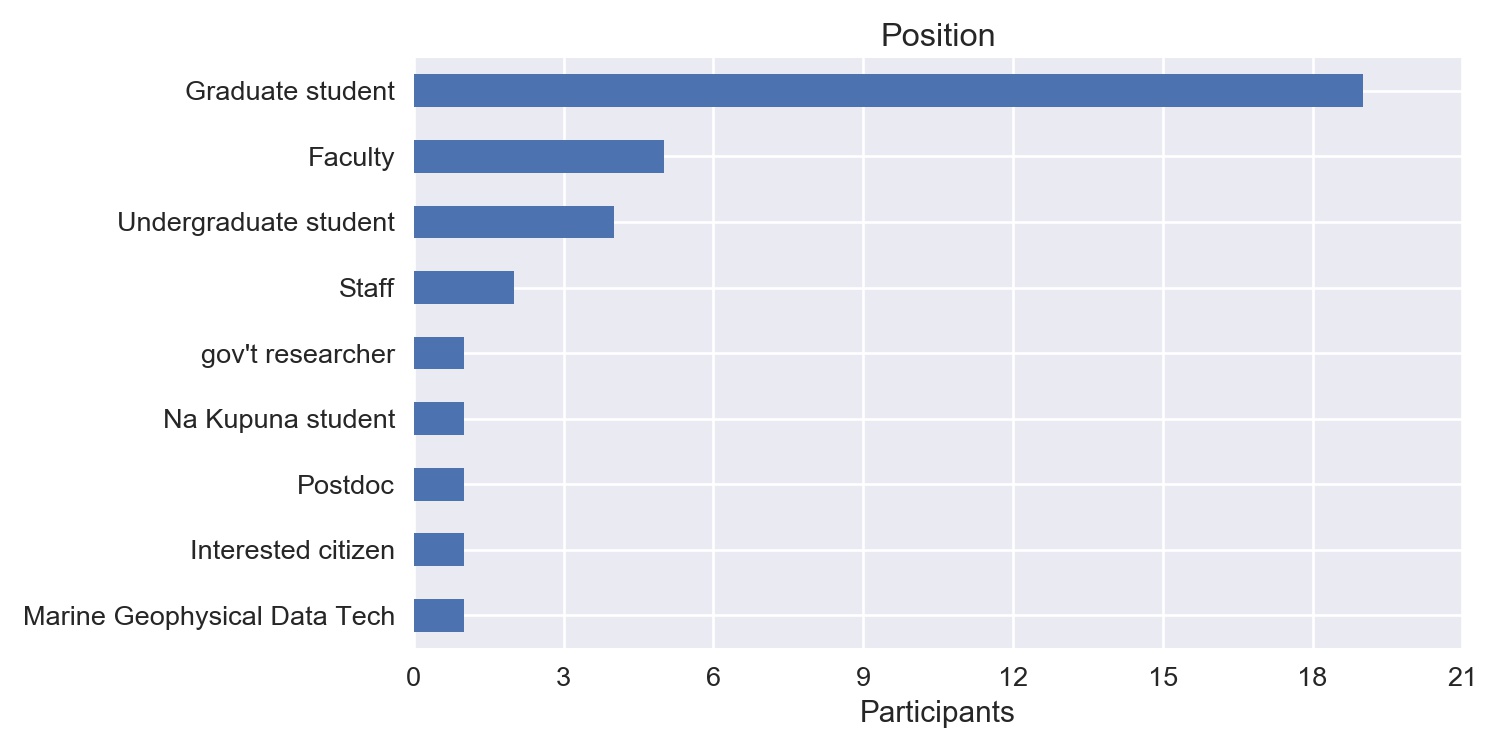 I was very pleased to have someone from the Nā Kūpuna Senior Citizen Visitor Program and a not insignificant number of faculty. We even had an "interested citizen" who studies film production and education (a personal friend)! 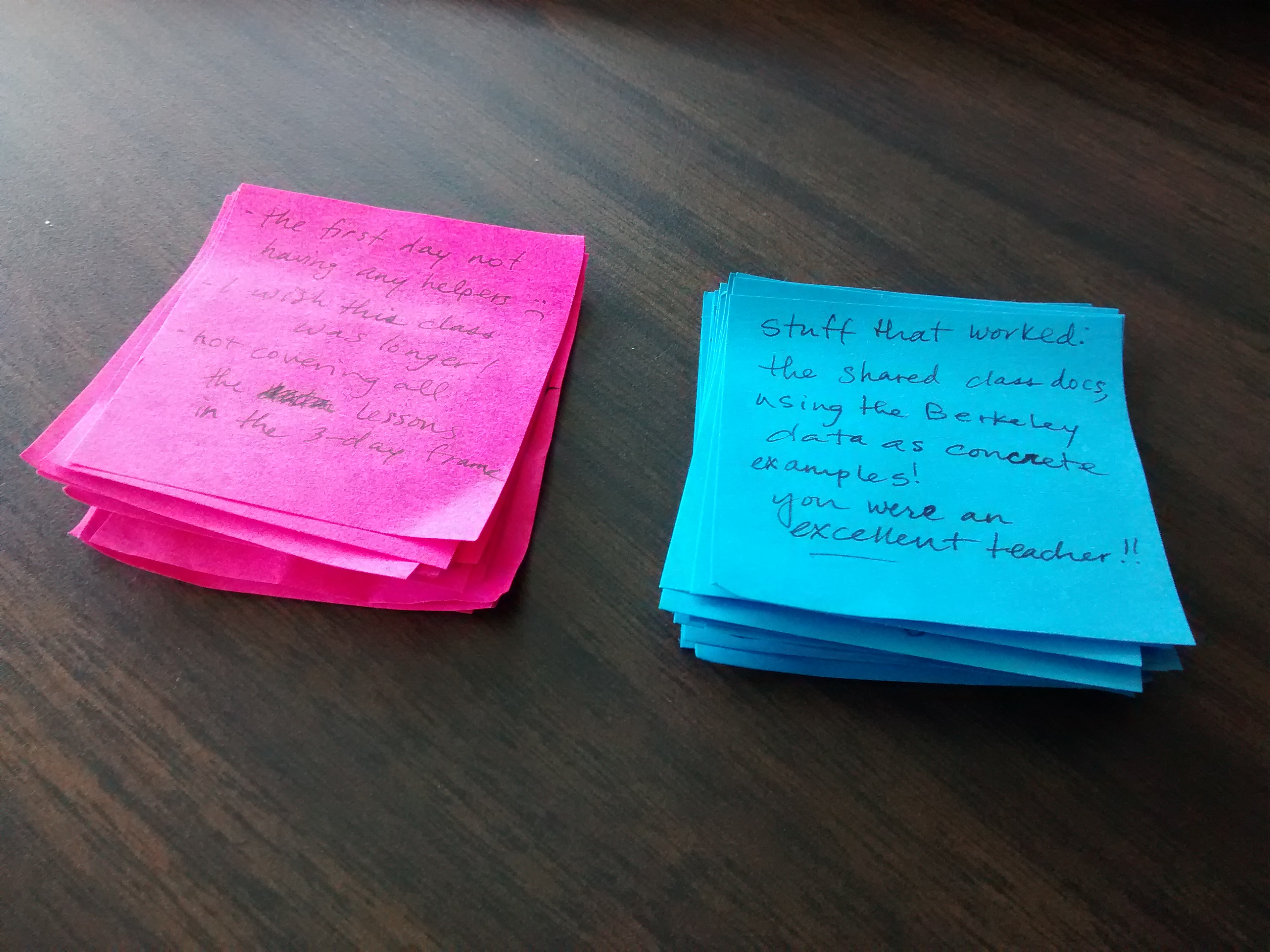 This is a synthesis from the feedback given by participants on the last day (using the pink and blue sticky notes):

It was a very funny coincidence that the exact same number of people complained about the pace being either too fast or too slow.

I was glad to see that the hands-on approach worked and the students appreciated using real data during the exercises. We had very little time (6h total) to cover a lot of material. So it's no wonder that people thought it was too short and maybe didn't explain quite as thoroughly some concepts (like for and if). Regarding the pace, it's hard to satisfy everyone. I expect that novices might have found the pace a bit too fast and more experienced programmers found it too slow (but I don't have data to back that up). Since only 6 people complained about the pace, I guess it wasn't too bad. Not having a TA on Monday (the first day) was not good because that is when the most serious problems occur (Jupyter won't start, where is my Python?, lost my files, etc). The next two days of the workshop were much smoother thanks to the generous help of volunteer TAs Sam Murphy and Julie Schnurr. We also didn't get to cover the last few topics on the last day (functions and getting data from headers).

A few things that I would have done differently:

Have you taught or participated in a workshop like this before? What were your experiences?