Running Jupyter and the Scipy stack on Android

Install Termux from Google Play, open it and run:

Copy the URL printed to the screen (it will look something like http://localhost:8888/?token=longstringofcharacters) and paste it into Chrome/Firefox. Enjoy!

Read on for more tips and a few tweaks.

UPDATE (25-01-2017): There were a few dependencies that I had left out of the instructions for installing numpy et al. I edited the post to make things more complete and clear.

I bought my first tablet last October, an NVIDIA Shield K1. I had been putting off getting one because I never could think of a good use for them. I have my phone for messaging and Internet, my kindle for reading, and my Linux laptop for working. It seemed to me that the tablet would be a nice toy but not something I could use and justify the purchase.

The dream would be to be able to ditch my laptop and do actual work on the tablet. Mark O'Connor wrote about doing just that on Yield Thought but he cheats a bit by running everything on a Linode server. And how does anyone do scientific programming these days without a Jupyter notebook?

I finally gave in, thinking that I would use the tablet mainly for reading papers and taking notes. Maybe even play a few games. Then I discovered Termux.

Here is a screencast of me running a Jupyter notebook server on my tablet. Notice that the URL is localhost:8888/ so this is not a remote server.

Setting up your terminal

Install Termux from Google Play and open it. You'll be dropped into a bash terminal, like the one below. 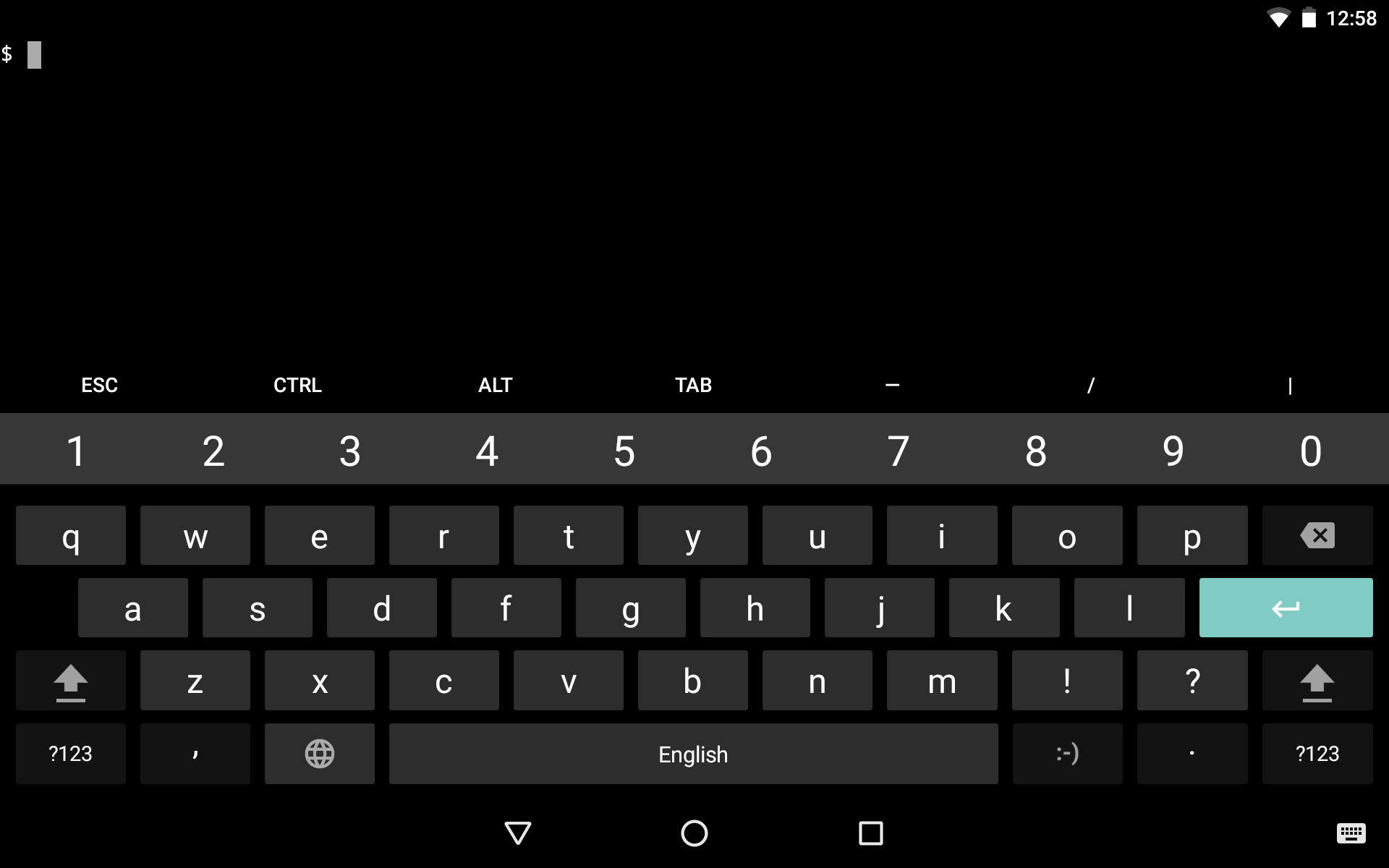 Termux uses the apt package manager so you can install packages pretty much like you would on Debian/Ubuntu.

The first thing I do on any new computer is install git so that I can fetch my configuration files from Github:

Before cloning the repository, I need to generate a new SSH key (only required if you use the SSH protocol with git):

Then I can clone my dotfiles repository:

Now my Termux terminal looks just like my Linux terminal on my laptops. 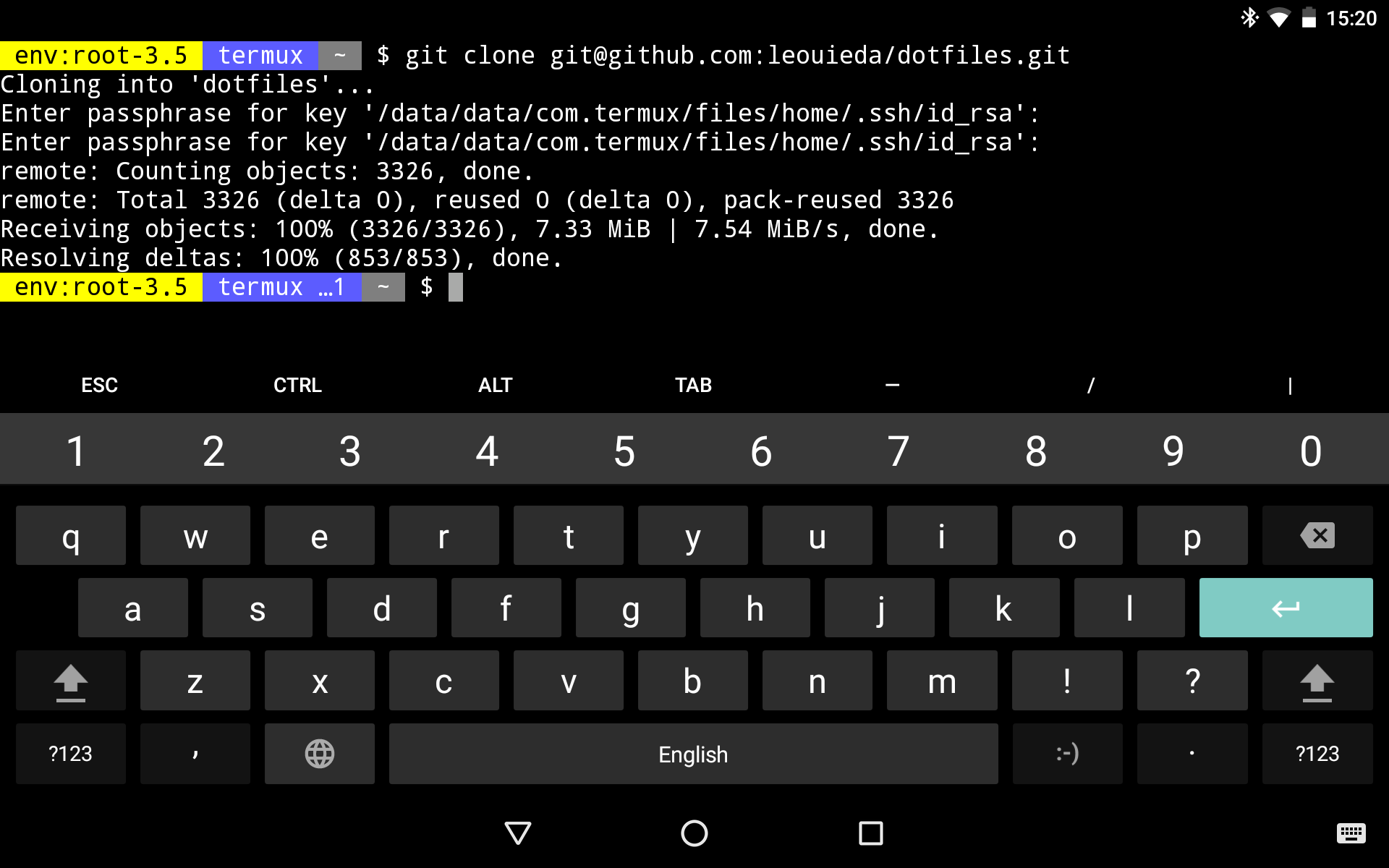 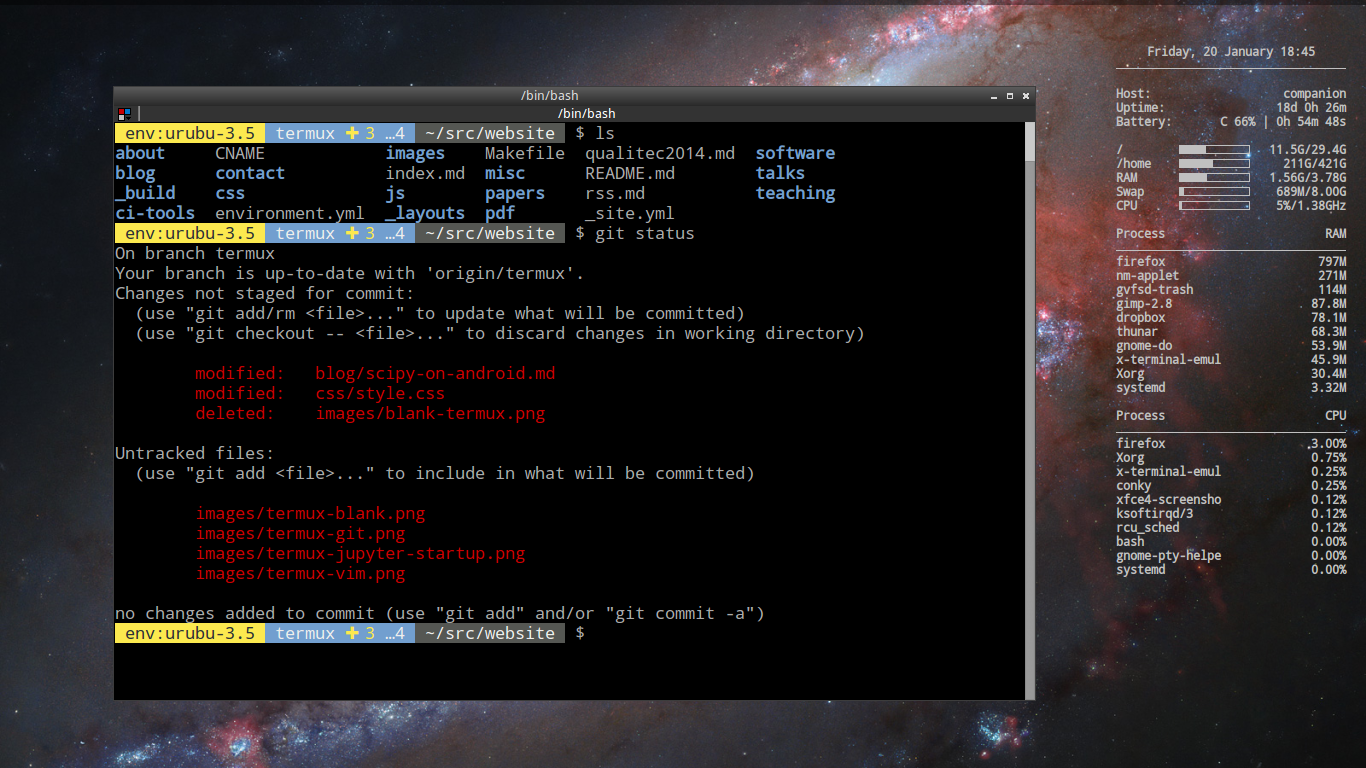 If you're from the pre-Anaconda era, you'll probably remember the frustration of trying to pip install numpy scipy matplotlib. Sadly, there is no Anaconda for Termux so we're stuck with using the system python and pip to install packages.

But don't despair! Things work more smoothly these days (if you follow the magic incantations). Sadly, the scipy library itself so far can't be installed without significant effort. Even then you might not be able to do it because of all the Fortran requirements (BLAS, LAPACK, and gfortran). So for now, we have to make do with numpy only.

First, we must install python it self (version 3.6), the headers files, a C compiler, and the FFTW package from Termux:

For matplotlib, we'll need to install a few more dependencies:

And for Jupyter we need to install the zmq library as well:

Finally, we can get pandas: 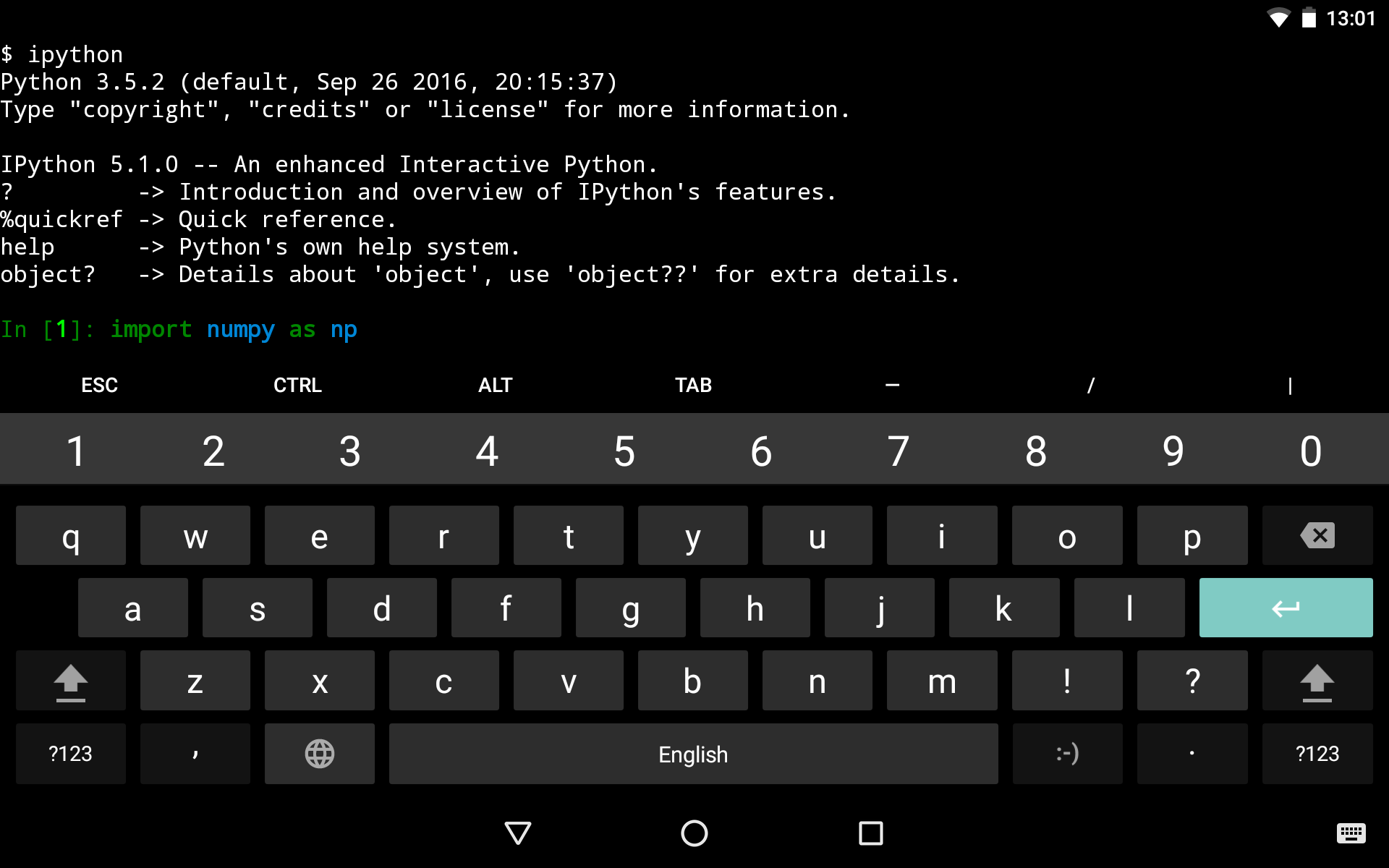 One thing that won't work are matplotlib plots because there is no backend for Android. You can, however, use %matplotlib inline or %matplotlib notebook inside Jupyter notebooks to get the plots working. Using plt.savefig without using plt.show() should also work.

To get a Jupyter notebook server running, so the same thing you would on any other computer:

The server won't automatically open a browser but you can copy the URL from the output and paste it into Chrome or Firefox. 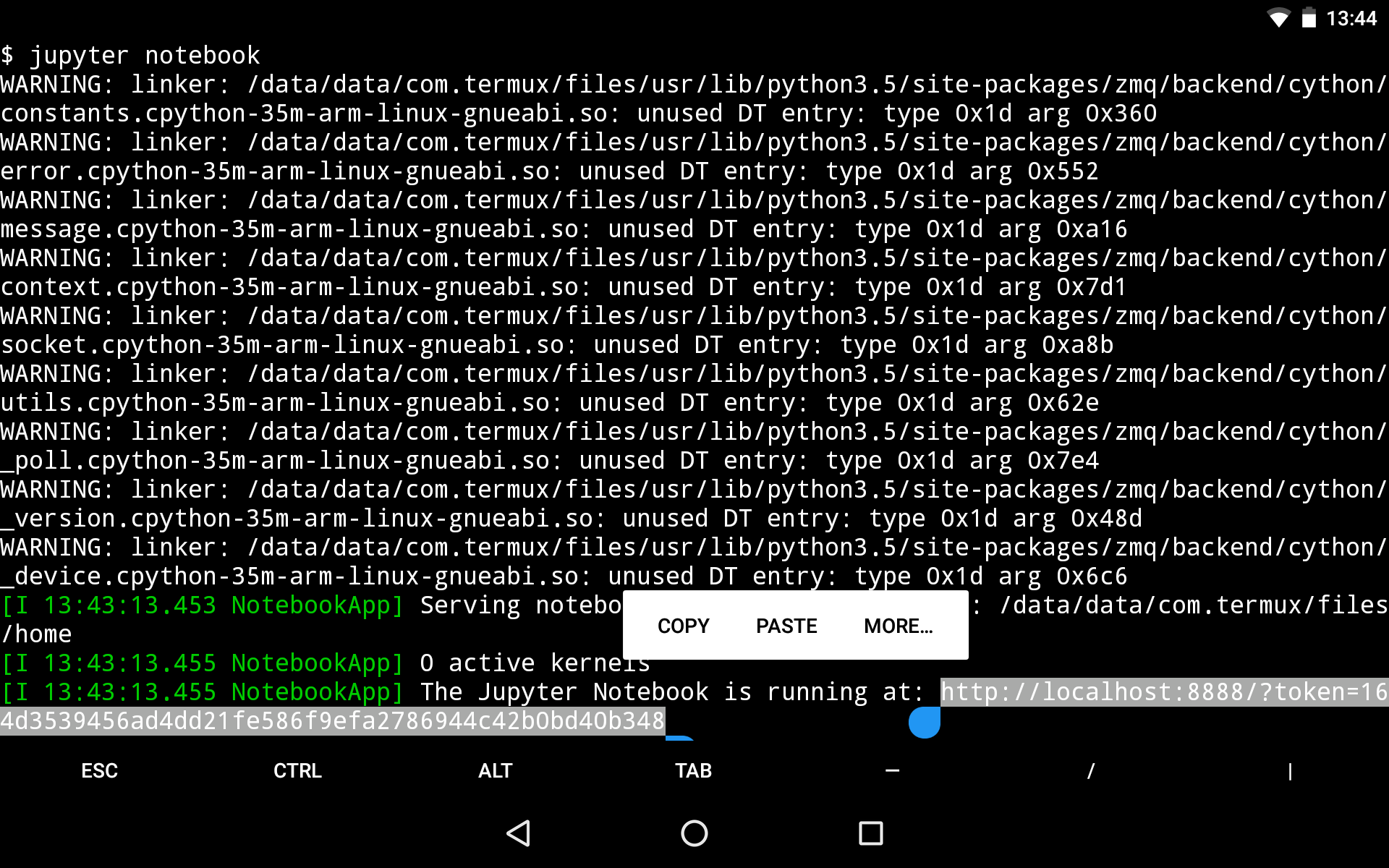 While it is possible to do some work using this setup (I wrote part of this post on the tablet using Vim and pushing to the website's Github repo), it may not be the most productive environment. Here are a few tips for making life a little bit easier. 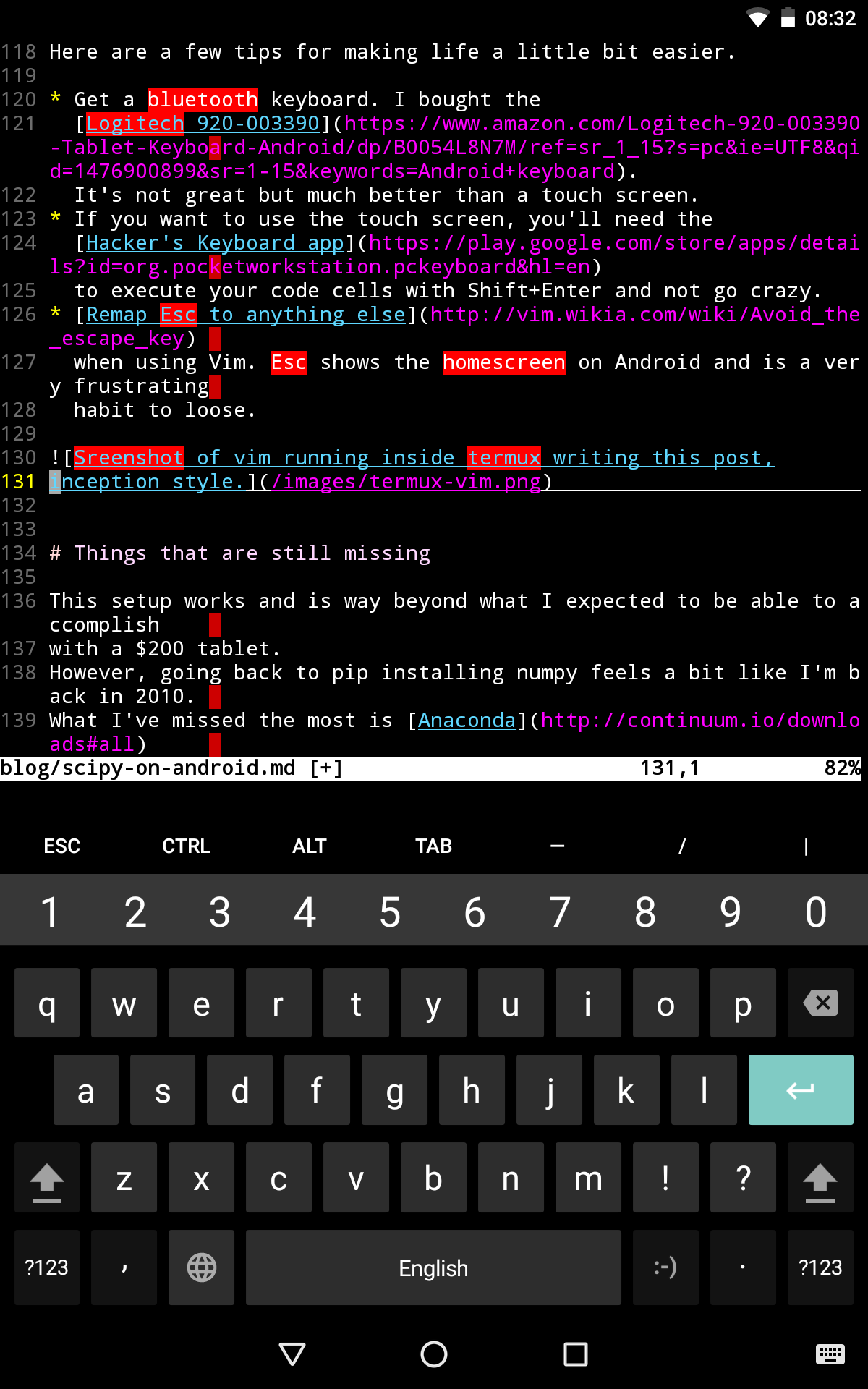 Things that are still missing

This setup works and is way beyond what I expected to be able to accomplish with a $200 tablet. However, going back to pip installing numpy feels a bit like I'm back in 2010. What I've missed the most is Anaconda and the conda package manager. Having a prebuilt bundle certainly makes life a lot easier. But I miss the conda environments the most. I use them extensively for my projects and papers.

The scipy package. So yeah, that is still missing as well. A lot of things can be done using numpy replacements (numpy.fft instead of scipy.fftpack etc) though they are usually slower.

Another recent arrival that has made a huge impact on my daily work is conda-forge. This project greatly democratizes conda packages. Now anyone can build their own packages for Linux, Windows, and Mac. It would be awesome to have some for Android as well. Assuming that you can get conda installed, the major difficulty might be finding a continuous integration service that runs Android and setting up the infrastructure.

Let me know if you try this out! Is there another setup that you use? What else is missing? Do you think we'll be able to fully work like this one day?

The Jupyter logo was downloaded from their Github repository (jupyter/design). The Android logo is CC BY 2.5 Google Inc., via Wikimedia Commons.